Our relationships with places are not that different from the ones we have with people. When they begin, we delight in discovery and the newness of everything. Then gradually our horizons shrink, we retreat into the comfort of familiarity, we declare ourselves bored, we fall out of love. But perhaps what we’ve actually done is stopped bothering to explore. 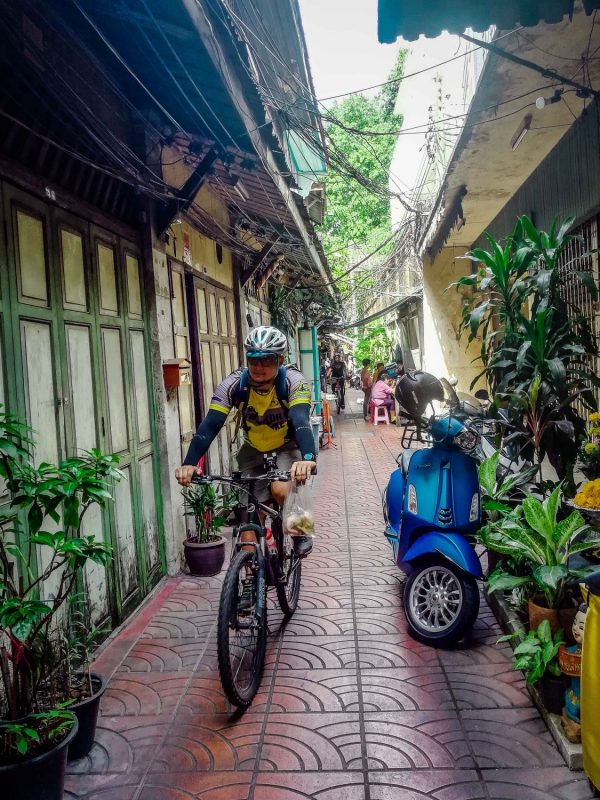 In Bangkok, sometimes just the thought of battling through relentless heat and traffic from one place to another is enough to sap the spirit of adventure. And it’s not just regular visitors and residents who find that our conception of this massive metropolis has become formed by a few frequented pinpricks on a map, and that the Bangkok we discuss as an entire entity actually amounts to a few sois around our offices, homes and hotels. First-timers can fall just as easily into a notion of what the city is and is not, based on a mixture of hearsay, legend, social media advice and the must-see lists of innumerable websites.

For these and many other reasons, the typical reaction to the idea of cycling around this city for a day ranges from confusion to horror to outright astonishment. Surely only the most fervently ideological Mamil would roll his carbon-fibre chassis out into Taowarat or Sukhumvit, running red lights and admonishing SUVs as he goes.

It takes approximately five minutes on a Smiling Albino bicycle tour of old Bangkok to rinse these ideas out of your head.

Cycling for the curious

Most visitors have at some point experienced that sense of vague wonderment at the warrens of life that unfurl themselves down every soi, sub-soi and sub-sub-soi in this city. This cycling outing takes that vague wonderment and turns it into eight hours of fascination.

Not far from the lobby of the Shangri-La where this particular trip assembled, the bicycles are already threading through sois where you can barely hear a car. The sheer speed at which you can move from the grinding roar of traffic to the shady peace of a narrow lane can leave you feeling that it’s been a while since you took a proper breath.

We are in old Bangkok, the city that exists between the fat lines of the expressways and main roads that give it much of its soiled reputation as a place only fit for cars. There are decorated walls left over from graffiti contests, the immaculately preserved residence of a 19th century French liquor trader (and his substantially less immaculate warehouse), Catholic churches from the years after the Burmese sacking of Ayutthaya, royal temples with murals so exquisitely painted that you wonder how not a single other visitor is there. 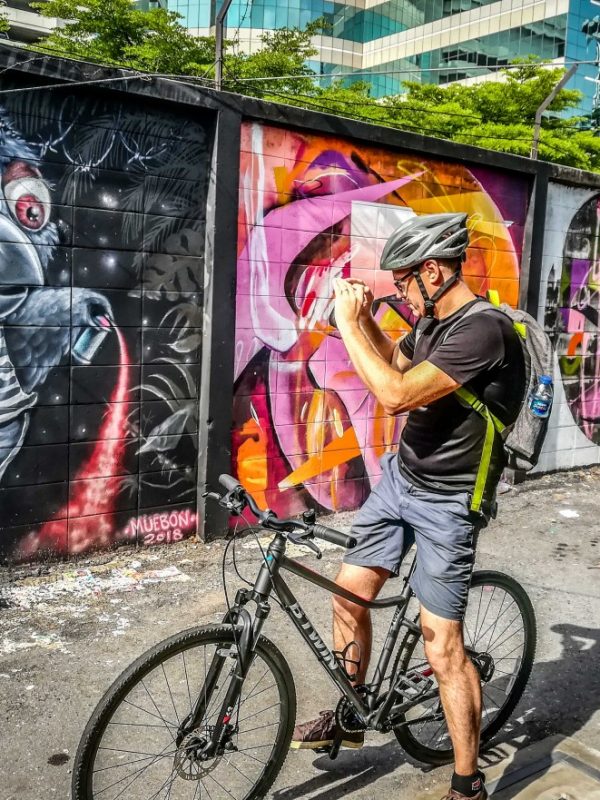 Hidden hamlets are our speciality

We pass an old Chinese trader’s mansion, whose heavy wooden doors open out to something wholly unexpected, stop at a Chinese coffee shop that doesn’t appear to have changed structurally since it first opened in the 1920s, where men with tombstone teeth smoke and stare. We pedal through mazes of tiled streets, that if nothing else expose by contrast the utter ugliness of asphalt, then into blackened dystopian alleyways piled high with discarded engines and car parts.

A semi-frantic dash through the traffic-choked grounds of a hospital leads us minutes later into the arcane, oil-soaked world of the Thonburi Locomotive Depot, where the heavily greased wheels of an old steam engine await their next nostalgic outing. Nobody pays much attention as we clamber between the tracks like schoolkids. A few hundred metres later, we are watching members of a family forging bronze bowls in the same way they have done for two centuries. 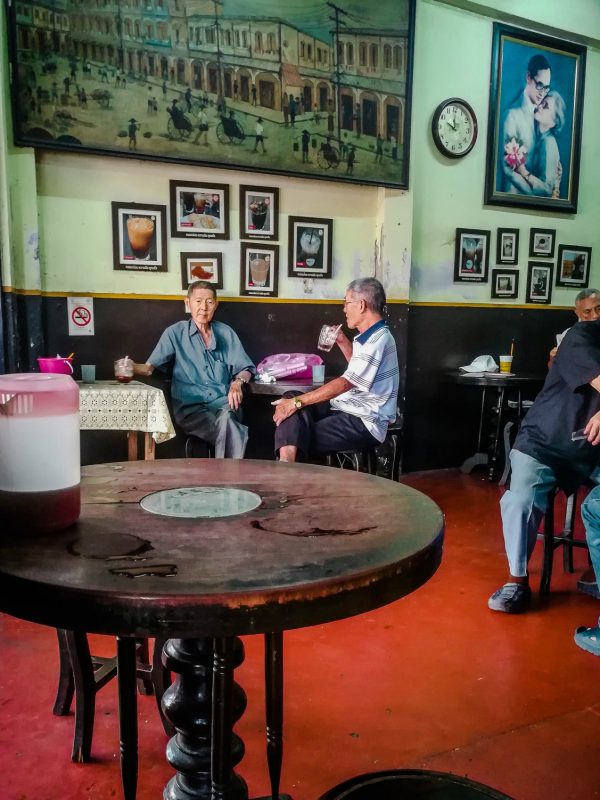 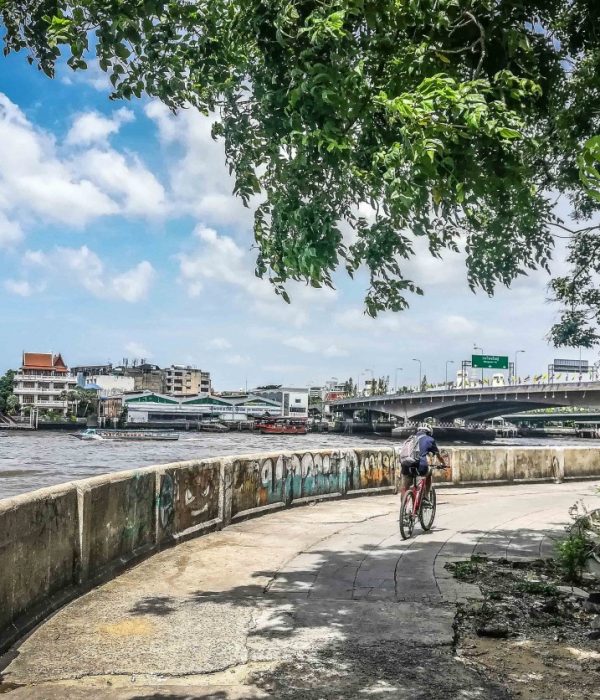 Bangkok is more than meets the eye

A semi-frantic dash through the traffic-choked grounds of a hospital leads us minutes later into the arcane, oil-soaked world of the Thonburi Locomotive Depot, where the heavily greased wheels of an old steam engine await their next nostalgic outing. Nobody pays much attention as we clamber between the tracks like schoolkids. A few hundred metres later, we are watching members of a family forging bronze bowls in the same way they have done for two centuries.

By the end of the day cycling through Chinatown and across the river through the historical lanes of Thonburi, there have been so many fascinating discoveries that it feels like I’ve been in a completely different city to the one I imagined I knew. Backed into the corner of a Skytrain carriage, hoping nobody would get close enough to recoil at my rancid sweatiness, a relationship with this city had been rekindled.

It turned out I hadn’t become jaded by Bangkok, I’d just stopped bothering to explore it.

Want to learn more about our cycling adventures in Thailand?

An Insider Look at our Da Nang Foodie Adventure
Read More
What Does Private Luxury Adventure Travel in Southeast Asia Cost?
Read More
An Outside The Box Sandbox
Read More

what are you waiting for?

Start planning your own adventure in Thailand. Get in touch with us or keep exploring.