Food and drink in Phuket's Old Town is reason alone to visit the island.

For those looking for a break from the beaches and have a passionate interest in food, you will be surprised that UNESCO has listed Phuket as a ‘City of Gastronomy’, one of the 17 selected cities worldwide.

My favourite time to explore Phuket’s Old Town is at night, preferably when the market is not in swing (so, not Sunday). The beautiful, century-old architecture stands in silence, gracefully illuminated, and there are plenty of quiet little restaurants and bars to slip into. This is also when you’re also most likely to end up sharing tea with a 4th generation Nyonya.

I did the hard yards of cocktail lounge hopping. Favourites are Club No 43 as well as Dibuk House – both with creative menus and great staff worthy of global hipster recognition as cocktail havens oozing old world cool. Both also have slurpable espresso martinis featuring Northern Thai Coffee and various cocktails featuring Phuket Rum and Gin. The “support local” and local low carbon impact on these menus really deserves another drink for the road, just for good measure.

Several new coffee houses, wine bars and cocktail lounges opened, almost daily, over the course of July, such as the new branch of Daily Dose on Yaowarat Road. It’s the same duo, Khun Tik and Chef Noi from Suay Restaurant. Chef Noi also lends his mobile cheffing skills for private events at Chalong Bay Rum as well as The Underwood Art Factory, which delighted our recent media guests. He has become the go to chef for private catered events and funkified progressive Thai cuisine. Plus he’s a nice guy.

Phuket Old Town might be the most caffeinated place in Thailand, outside of Pai, which may boast the most coffee shops per capita in Thailand. I sought local advice various times for my fix, and was regularly steered to Campus Coffee on Krabi Road, and award-winning superstar barista creations at Shelter Coffee, on Dibuk Road. Certainly, the old town has the caffeinated energy to keep up with the pace of expectations. 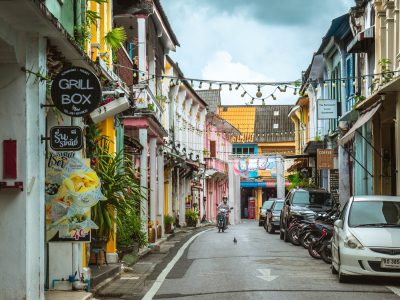 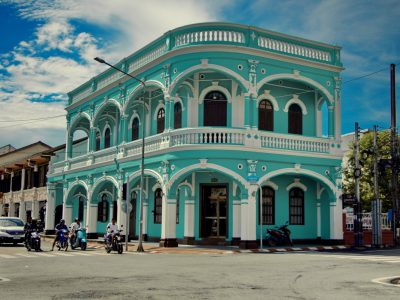 I love that about Phuket, and Thailand for that matter. Miraculously good food from the most nondescript roadside kitchens.

Phuket’s global bragging-rights comfort food dish is probably Mee Hokkien, the egg-noodle with pork and/or seafood in thick, peppery soup, bright and adapted by the island’s early Fujian Chinese community. I had no less than 10 dishes in July, all at different locations. There’s even a map of Mee Hokkien of the top 30 or so places on the island to have it, including 20 or so in the Old Town itself.

My fave: Go La for the old school charcoal grill and the to go version wrapped in banana leaves. I also had an outstanding version at a little place near the entrance to Wat Chalong. I love that about Phuket, and Thailand for that matter. Miraculously good food from the most nondescript roadside kitchens.

Mee Hokkien has its connoisseurs. See this well-researched list by the never-full team at Fantastic Food Search. I didn’t get to try their recommendation for fried pigs face, but it does rank as one of Phuket’s other must-try dishes. 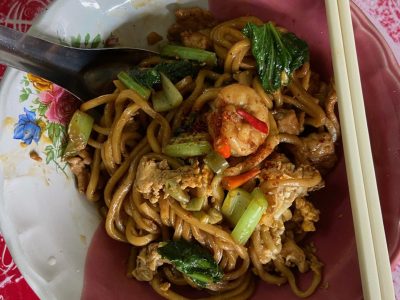 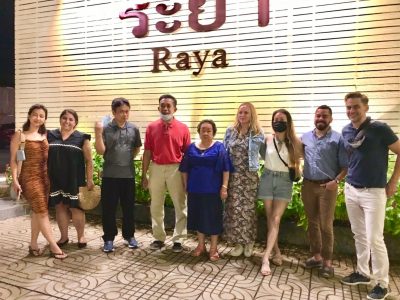 Of course you need to also eat at Raya, or their younger sister’s outlet behind it, One Chun. Similar vibe and menu, same extended family, different kitchen. Both feature another of Phuket’s must-eats, that being Gaeng Nua Pu Bai Chaplu, massive chunks of white crab meat and an incredible use of turmeric in the coconut herbal curry-for-your-soul soup, topped with piper leaves. This was like something concocted by Jay Fai’s long lost southern cousin on a turmeric fit. I was utterly helpless, and lathered it over vermicelli noodles in the most selfish display of gluttony I’ve performed in ages. I faked participating in a dinner conversation with friends for fifteen minutes while privately lost in its glory. I regret nothing.

The food and drink scene in the old town is part of Phuket’s native depth, which has been sometimes overlooked the past 25 years in favour of the more globally famous beaches, nightclubs, and superyachts. I love those things too, but Phuket is, afterall, recognized by UNESCO as a global city of gastronomy.

Our advice? Go there, and eat your heart out.

here are our foodie favorites

Phuket Old Town Gastronomic Adventure
Read More
Bia Hoi: All About Vietnam Beer Culture
Read More
An Insider Look at our Danang Foodie Adventure
Read More
This website uses cookies to improve your experience. We'll assume you're ok with this, but you can opt-out if you wish. Cookie settingsACCEPT
Privacy & Cookies Policy