Despite having lived in Southeast Asia for nearly seven years I didn’t get a chance to explore Myanmar for the first time until very recently (March 2020). The so-called “Golden Land” has been at the top of my travel list for years now and as I finally got around to booking my trip, and as my departure date was fast approaching, I certainly wasn’t going to let fears of COVID-19 get in the way!

The adventure began with a 3 night stay in Myanmar’s former capital. While no longer the political center of the country, Yangon is still Myanmar’s biggest city and is the heart of trade and commerce. It is a beautiful city with a pan South/Southeast Asian feel, glittering temples, traditional crafts, colonial architecture, a circular train around town, and, of course, fantastic food

A burgeoning nightlife scene is also great for those (like myself) that fancy a drink or two after a long day of exploring the city. 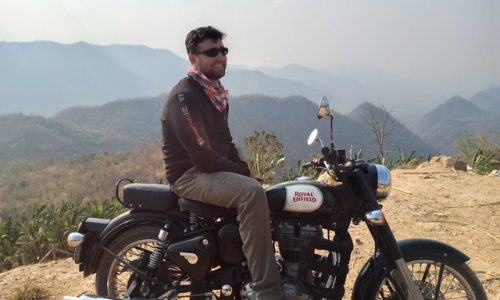 Insider Fact: Yangon is a motorbike-free city. Unlike other major cities in Southeast Asia (most notably, perhaps, Hanoi and Saigon), you won’t find a frenzy of two-wheelers and honking dominating the streets. The reason for this is a topic of some debate but most attribute the ban to a disgruntled military general seeking revenge on a bunch of motorbike drivers that made threatening gestures towards him on the road. Whatever the reason for the ban, it makes for an interesting change in urban pace.

After Yangon, we flew up to Mandalay where we stayed for just one night before beginning a weeklong motorcycle adventure. Though only limited time, checking out the former palace and taking in the sunset from Mandalay Hill are simply must dos (and we did). As we began our motorbike trip the next day (the first leg of which was a more than 200 km jaunt down to Bagan), we took a worthwhile detour to Mingun Pahtodawgyi; the so-called “Unfinished Temple”. It might just be the highest pile of bricks in the world, built in the late 18th-century and only comprising the foundation of what would have been a massive stupa.

Nearby we also saw the Hsinbyume Pagoda, known as the Taj Mahal of Myanmar, as it was built as a memoir of love by King Bagyidaw to his wife. The rest of the ride skirting along the Irrawaddy River down to Bagam was long, hot, and dusty … but we wouldn’t have it any other way as we discovered Myanmar in motorized style! 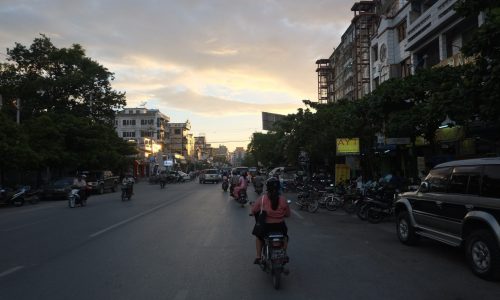 Insider Fact: One of the most unique experiences to partake in during a visit to Mandalay is the daily face-washing ceremony of a highly sacred Buddha image at the Mahamuni Pagoda. If you don’t mind getting up super early (or staying up super late?), head to the pagoda at 4:00 am to partake in this fascinating and deeply spiritual ritual. The idea is that the Buddha, just like everyone else, needs to start the day with washing his face and brushing his teeth. You won’t see many other tourists around, but lots of pilgrims and Buddhist monks from all over the country come to see this ritual on a daily basis.

If traveling was a video game then Bagan would be the final boss of ancient brick temples in Southeast Asia. Bagan consists of thousands of Theravada Buddhist monuments which were erected between the 10th and 14th centuries AD, at a time when the area was the political, economic, and religious seat of Myanmar’s powerful Pagan dynasty (Myanmar’s first unified Burmese Kingdom).

Indeed, Bagan is considered the world’s largest and densest concentration of Buddhist religious buildings. Dotted across the landscape are massive stucco-covered brickwork monastic complexes, as well as more modestly sized and small stupas and wats, some mere piles of rubble covered in thick shrubbery. It is the combination of all of these buildings – in varying stages of ruin, repair, renovation, and reconstruction – imposed on a vast and continuous landscape that gives Bagan its unique and seemingly timeless character. While we didn’t get those quintessential sunrise or sunset shots, a day spent on electric scooters exploring some of the thousands of stupas and pagodas scattered across a barren landscape was surreal. 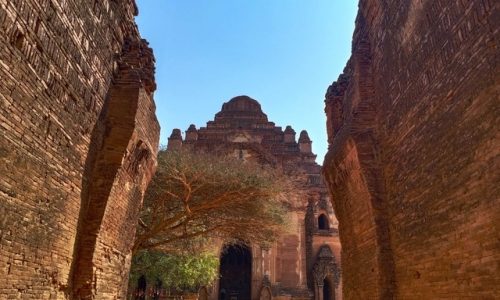 Insider Fact: The landscape surrounding Bagan can be barren, almost desert-like. While during the rainy season, patches of green tend to beautify the area, during the dry months it is truly, well, dry. Interestingly, this is not purely a consequence of the natural climate — in order to sustain the centuries’ long building frenzy at Bagan, a truly vast number of trees had to be burnt in order to fire countless numbers of bricks at high temperatures. Human-fueled resource depletion leading to environmental degradation? That sounds familiar.

Stay tuned for the next episode or contact us to start planning a Myanmar journey.

An Open Letter About the Coup in Myanmar
Read More
A Pre-Covid Myanmar Journey, Part 1
Read More
Travel From Home: Our Favorite Virtual Travels
Read More
This website uses cookies to improve your experience. We'll assume you're ok with this, but you can opt-out if you wish. Cookie settingsACCEPT
Privacy & Cookies Policy